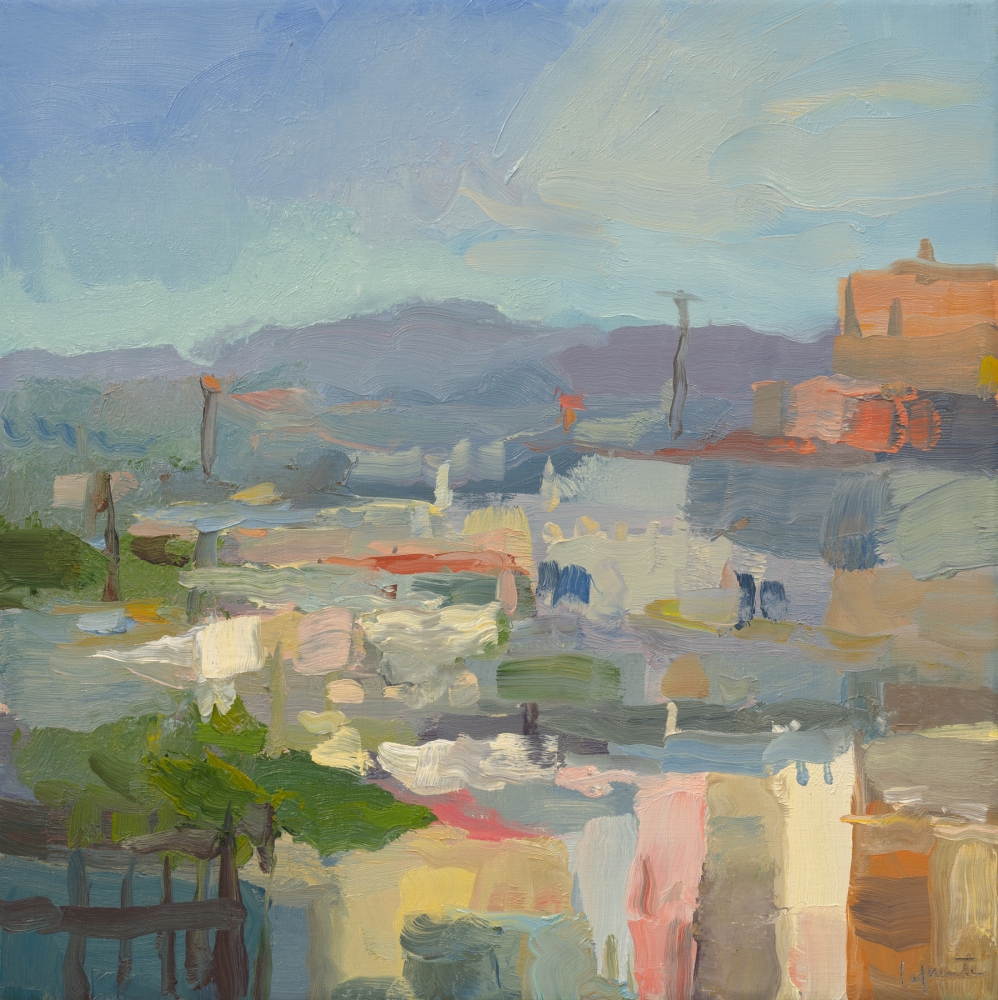 When Christine Lafuente set out to paint her latest series of works in Puerto Rico in March 2020, she never fathomed what would transpire over the next few months. The trip was planned a year prior after having visited the country for a workshop and finding that the cities reminded her of her late father’s home country of Cuba, which he left to go to university in the United States and was unable to return.

Lafuente had planned to explore San Juan, learning more about the people, the architecture and the culture, in hopes of making a deeper connection to a similar ancestry as her own. Soon after she arrived for what was supposed to be a shorter trip, Lafuente was locked down in the country and stayed for several months because of the pandemic. Her work, which she had hoped would reflect the vibrancy and beauty of the city at a more intimate level, shifted to views from the windows of the terrace apartment she rented. The work created was more internal but still filled with the bold architecture and bright sunlight.

“My experience in Puerto Rico was pivotal. In some ways it upended my whole life and in some ways it clarified what painting is for me,” says Lafuente. She adds, “My intention was to really be in the architecture of the whole city and island, but I ended up being in just one place. I had a terrace overlooking Casablanca, the bay of San Juan, the governor’s mansion and the mountains of Puerto Rico. I couldn’t have picked a better place to stay.” Painting the views, Lafuente found herself connecting with nature in a bigger way, infusing her work with the color and light found in the city.

"It was like I was holding on to dear life and more than I ever have before because I couldn’t go home. I was having this equivalent experience my father had because he could never go back home to Cuba. And here I am trying to understand Spanish-Caribbean culture and who he was and who I am, because he’s part of me, and I couldn’t go home,” explains Lafuente. “I just had to really be at peace with the world right in front of me.”

The art made in San Juan became the middle chapter of her approximately 30 paintings that will be available in the show The View from Here at Philadelphia-based Gross McCleaf Gallery, which is under new ownership. The artist also will feature pieces of Mount Desert Island, Maine—a place she often visits in the summer—and those painted in her home in Brooklyn, New York, after returning from San Juan.

Her Maine paintings, including Great Harbor in Acadia, are the first group of works. They are more subdued landscapes focusing on the visual experience and atmosphere. Often, Laufente will paint the scenes after returning home as almost a memory of what she experienced. Great Harbor in Acadia, inspired from her 2019 visit to Maine, was one such painting. Her goal with the work was to catch the “sizzling effect” of the light coming through the haze.

The final part of the exhibition features still lifes that were created after Lafuente arrived back in Brooklyn from Puerto Rico. “When I came back to Brooklyn, I was imagining that I was in Puerto Rico with all the candy-colored streets and these majestic skies up above. It’s been kind of a fun thing to bring that home and try to set up these still lifes,” says Laufente. Previously, she may have found the works to have too much color, as she tends to be a tonal painter, but what resulted were pieces such as Cherries, Roses, and Pears, Contra Jour and Dahlias and Peaches that have symphonies of color and add a bit of joy.

When viewed separately the three groups of artwork in the exhibition have different focuses and purposes, but arranged together they show development and exploration. Collectors will notice not only the story of viewpoints, but also stories of places and circumstances. It is a visual journey through Lafuente’s artwork as well as a journey that impacted her life.