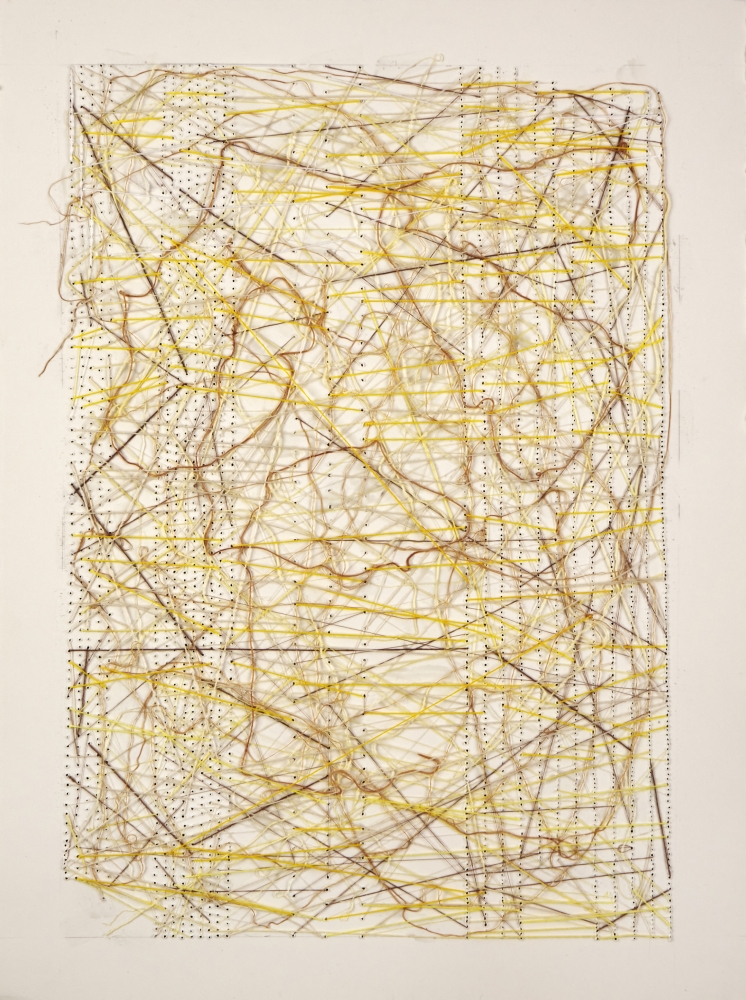 The idea of ‘materiality’ in art has moved well beyond the realm of the physical and the tangible, to include instead a variety of dematerialised approaches to the creative expression, a way by which artists continue to relate to the external around them. The ‘material’ in its varied iterations seems to draw on a shifting barrier no longer limited to the concrete, rather pushing into the space of the abstract, the emotional, and the sensorial. And yet, when we consider investigating the power of the ‘sensorial’ in one’s creative process or artistic expression, it sits firmly beside and in dialogue with older and more traditional forms of media such as oil paintings, drawings, etching and printing. The intersection of the traditional with the contemporary as a way of exploring the world is what lies at the heart of New York-based Assamese artist, Natasha Das, whose art practice is a confluence of materials and methods moving in both form and approach. Her most recent works, which are currently part of a group show called ‘\ ˈtəch \*’ explores the immediacy and the importance of touch as a way of understanding the world around us, learning about it, relating to it, and perhaps relating in turn to our own ideas of the self.

Das has a rigorous grounding in traditional oil painting through her art-training in Florence, Italy, where she learned to look at the physical world through the medium of oils, both depicting it and learning from it. “I painted beautiful still life and figure compositions in Italy, I was young and very much influenced by 19th century Romanticism. When I moved to New York and started creating here, I had a different window into life and the world. In New York, everything is about the moment,” says Das, adding, “I recognised my reality shifting, breaking out of the realist painting technique that I had trained in and as a result, my work shifted to a more process-oriented approach. The material, my compositions, and my creative process evolved into something more abstract. Working with threads started as a curiosity and necessity. The idea of layering and working with impasto through oil moves me. I began to see thread having the same effect on a surface”.

Das’s recent works find their roots in the communal space; she learned the technique of bringing thread and needlework into her paintings and of their inherent tactility from a community of local artisans back at home in Assam. These men and women were skilled at their craft, where the knowledge of the art form was kept as a protected secret passed down generation-by-generation. Working closely with these largely insular communities seems in itself to be a part of the artist’s process of creation, which is as much about the autobiographical and the self as it is about documenting these communal living cultures, the universal appeal of the ‘handmade’ and how closely that relates with the ‘creative’ facet of the human experience. ‘Materiality’ for Das no longer arises from a cerebral or an intellectual space, rather it comes from the emotional and from the inter-connectedness that is creation. While on one hand, the permanence of a sewn thread on the canvas employs her agency as an artist choosing its careful placement, on the other, it is also a form of memorialisation of community and the notion of creativity in itself, as Das composes her work she experiments with materials and texture, colour and visuals, traditions and updating.

“I always start my compositions from a memory. I begin with what I know. My training in Florence was highly technical, so I spend hours sketching my memory’s image and only after that do I begin decomposing it. Form goes out of the window, colour and feeling take over. I prefer to keep my work as an open-ended composition, there is rarely a particular pattern or form to it. It is inherent, puzzling, my choices often appearing as random or scattered. I am never entirely certain if they aren’t, if there is logic to them, it is created through the materials themselves. I might start from a tactile experience, but my process is the mode of interrogation - exploring the intersection between the tactile and the visual as a single inextricable encounter,” mentions the artist.

Das’ work with oil and thread revitalises old methods, they are like stories that have taken on an archetypal role in our own personal and universal mythos. ‘Materiality’ to her it seems is no different.  She is aware of the long-gendered history of the materials of her choice, their trysts with societal norms, politics, culture, and now popular culture. “In my work,” she says, “threads perforate heavy surfaces of oil paintings on linen, offering a different understanding of the interrelationship between these two constructs. I like the sculptural rough surface oil creates. It is through careful repetitive movements that I coax out the innate character of each medium, contrasting the confidence of oil with the submission of thread. The composition becomes about how to make the two mediums work together”. There is no questioning the parallels existing in the artist’s approach to materiality and creation as a window into the world and her relation to it. It is a place where the masculine and the feminine coexist within a layered ecosystem of harmony and friction, where the old and the contemporary exist in conjunction with one another, and where the form is celebrated as much as colour, method or approach. It is in many ways a deconstruction of the idea of ‘materiality’ itself and in other ways the starting place for an investigation into it.

Oil And Thread On Linen

Oil And Thread On Linen